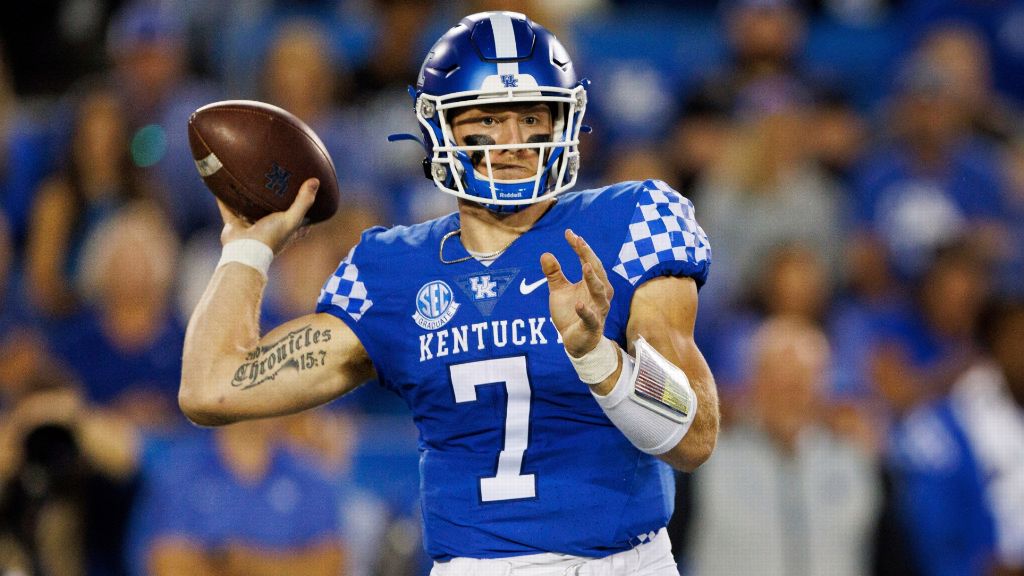 It feels like the season had just started and here we are already entering October football – enjoy it while it lasts folks! We are 20-20 so far on the year losing some dough on the juice but this just might be the week we break through like we did in NFL. An exciting slate of games is upon us with numerous Top 25 matchups so in we go.

A tale of two stories for this Iowa team as they are top in the nation in scoring defense but dead last in total offense. Their defense as always is one of the best in the country and will be able to get pressure on JJ McCarthy all day long but will have their hands full as Michigan has one of the top running backs in the nation in Blake Corum. Michigan passed its first true test this season as they prevailed over Maryland but will face the toughest defense this year to date. I don’t feel comfortable taking the points here with Iowa given with how their offense has looked so far this season but with this being the first real defense Michigan has seen laying the points doesn’t seem that appetizing for me as well.

This matcup kicks off an exciting College Football Saturday as Kentucky and Ole Miss lead the first of 5 Top 25 matchups. This game will showcase good versus good as Ole Miss brings in one of the top rushing attacks in the nation being ranked 4th nationally. Kentucky brings in a Top 30 ranked rush defense as it was on display earlier in the season quieting Florida’s impressive run game. Kentucky will also be getting Chris Rodriguez back from suspension this week as the star from last year will provide much needed balance to this Wildcat offense. Kentucky’s Will Levis has an NFL caliber arm but has had very little time to make decisions in the pocket as his offensive line has not been as formidable as it was last year. Kentucky will get a boost from the return of Chris Rodriguez and putting my faith in Will Levis to keep this one within a touchdown.

Oklahoma travels on the road as they look to bounce back after their first loss of the season. Oklahoma Dillon Gabriel has been nothing short of impressive this year after transferring over from UCF. Oklahoma’s defense will have their hands full this week as TCU QB Max Duggan has led the Horned Frogs to a 3-0 start. Offense was not the issue for Oklahoma in their loss last week as the offense racked up over 500 yards of offense and over 7 yards per play. What killed the Sooners was their inefficient rate of converting 3rd downs as they were below 25 percent in doing so last week. The over seem sto be a logical play but I’m backing an angry Oklahoma team to come out of Texas with a win by a touchdown or more.

This game could have been featuring 2 undefeated teams and a potential Top 10 matchup were it not for a missed field goal to win the game for Arkansas at the end. Alabama seems to have found their groove again after their close scare in Austin earlier in the year. Alabama will face a familiar face in Arkansas’ defense as transfer LB Drew Sanders leads this defense in the nation currently in sacks. Arkansas is coming off a heartbreaking loss but will have their fans behind them to create havoc for Alabama communicating throughout the contest. Ultimately, I believe Alabama’s passing attack will be too much for Arkansas to handle with their limited secondary. Alabama leaves Arkansas winning by 3 touchdowns as Will Anderson keeps this Alabama defense stout.

Oklahoma State comes into Waco, Texas undefeated on the year as they take on the Bears for their first Big 12 conference game. The 2 teams squared off last year in the Big 12 Championship game with Baylor winning 21-16. The final score would have cruised way under the total we have this weekend but keep in mind that Oklahoma State lost their defensive coordinator to Ohio State and is still trying to regain their form they ad last year. Spencer Sanders has impressed so far this year for Oklahoma State, but this will be his biggest test yet. The best part of this Oklahoma State defense is probably their front 4 so I expect Baylor QB Blake Shapen to take advantage of throwing the ball downfield as opposed to running into their stout line. This game will lie heavily on the shoulders of Spencer Sanders as last year he threw 7 of his 12 interceptions on the year to a Baylor defender. If he can keep the turnover worthy plays to a minimum then the Sooners have a shot to upset this week. Give me Baylor with the home field advantage in this sure to be close match up.

Sam Hartman and the Deacons come into Tallahassee after a heartbreaking loss to #5 Clemson at home in overtime. Wake led a majority of the second half and seemed to be on their way to an upset win before Clemson fought back to ultimately win in 2OT. Meanwhile, Jordan Travis and the Seminoles are perfect so far this season but face their toughest match to date with a highly ranked Wake Forest team. You can see how much playing at home versus on the road matters in College Football as Wake were 7 point underdogs to Clemson at home and now nearly 7 point underdogs to Florida State on the road as Clemson and FSU would not be a pick’em on a natural field currently. I still don’t love the idea of laying a big number like this with a young Florida State team who still needs to prove their new Top 25 ranking so let’s have a fun shootout down in Florida.

Texas A&M managed to recover after their shocking loss to Appalachian State with back to back Top 25 wins over Miami and conference rival Arkansas. Although they got the win, Texas A&M still looks rather lost on offense. Ultimately, I believe the Aggies luck will run out as the injuries begin to pile up. Texas A&M may have won their last 2 match ups but were outgained in both of them and rather lucky to have snuck out a win against Arkansas with a 99 yard fumble return. Aggies have a stout defense but better in the run game rather than through the air. Mike Leach’s air raid offense test you far and wide as Mississippi State QB Will Rogers will look for their first conference win this season. Bulldogs win and put Texas A&M’s luck to bed.

Jordan-Hare night game? Hopefully LSU faithful say a prayer before the match up Saturday night as there’s surely going to be a crazy play or 2 happen inside that haunted stadium. A key to look out for is the health of LSU QB Jayden Daniels as he is recovering from injury from last weeks matchup. Although 3-1, Auburn is not the team we all know from years past as fans are up in arms with the direction of their beloved team as they barely eked out a win against a below average Missouri team at home. There are very few circumstances now this year where I will back the Auburn Tigers as they have questions at QB and questions moving the ball on offense in general. Since the health of LSU QB Jayden Daniels is till rather bleak currently it leaves me with one faithful Auburn play for this week and that is to see some bad football.

Clemson returns home unblemished as they fend off Wake Forest in double overtime. After exhausting themselves they don’t come back for an easy matchup as they are faced with yet another Top 25 contest. Luckily, Clemson will have home field advantage this time and the impact of Death Valley rocking in a night game. Wake Forest QB Sam Hartman continuously picked on a young and inexperienced Clemson secondary either completing a long pass or forcing a pass interference flag to continue their drive. If Devin Leary can take note of what Hartman did this past week then an upset might be on the table, but no doubt Dabo will have an answer. With such a lower total, Vegas is predicting an offensive struggle for these two teams and if Clemson can clean up their secondary points may be hard to come by for the Wolfpack. Fool me once can’t get fooled again? Clemson by a touchdown.

Kirby Smart is a Nick Saban disciple, and the apple doesn’t fall far from the tree on one thing here. Georgia and Alabama led teams nearly always come out firing after a game in which they didn’t play up to their standards. Some may look at the box score and be confused as Georgia ultimately won the contest by 3 scores, but they looked far from the #1 team in the nation last Saturday. They looked sloppy on offense and the defense looked lackluster throughout the afternoon giving up the most points it had in a very long time to a Kent State team. No disrespect to Kent State and the program they are running but you would always expect Georgia to handle that game better than they did. Georgia wins this one in a blowout as Missouri is one of the bottom teams in the SEC.