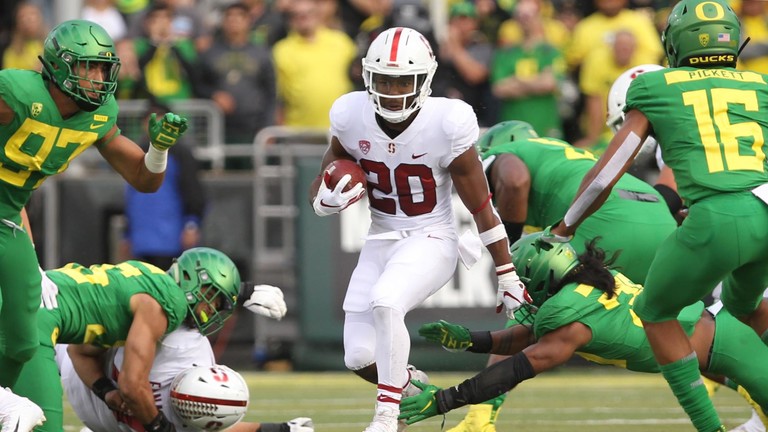 I’m pretty sure I warned everyone before this past week. Whenever you think you have a bad lineup of games, that is where upsets happen. Boy, was I right! There were four top 25 upsets this week and Oklahoma went to overtime with Army. Virginia Tech lost to some team called Old Dominion (No, not the country band), Texas Tech shocked Oklahoma State, Texas is starting to think they’re back after beating TCU, and Mississippi State is actually not good.

No Texas is Not Back

I honestly had to re-watch this game to assess if Texas was really back. A fuzzy memory from the bars in Uptown Dallas was the cause.

But after further review: Texas is not back. TCU was the better team for almost a full three quarters of that game. However, a key to the Texas 15-point win was the turnover battle. TCU had four costly turnovers including two interceptions and a fumble by young QB Shawn Robinson. Robinson actually had an alright day other than the crucial turnovers.

If these teams played a rematch I’d lean towards TCU, but the after game assessment is TCU is worse than we thought and Texas is just a little better than we thought. I look at Texas as a seven or eight win team.

By the way, one of the worst decisions I saw all week was TCU Head Coach Gary Patterson punt on 4th and 4 with 2:36 left in the fourth quarter down 15 points. Time is your enemy at that point. Punting took over a minute off the clock and backed TCU up to their own 22. It was a give up play and one of the worst coaching decisions of the year.

Where did the ACC go

After the Virginia Tech loss to Old Dominion, Clemson and Miami look like the only real contenders. Duke is undefeated, but unproven. It looks like Clemson should have a nice walk to the College Football Playoffs. I say should, but they’ve been known to trip to bad teams (last year loss against 4-8 Syracuse). If they lose, they could be looking at a similar situation as Wisconsin last year where they may not have enough quality wins to make it.

Oregon absolutely gave the game away to Stanford. Oregon was the best team through all four quarters, but two costly fumbles gave Stanford a chance. They outgained Stanford in yardage 524-398, and held Stanford to just 71 yards rushing! Not only that, I don’t think I’ve ever seen a game where the quarterback completes over 90% of his passes in regulation and doesn’t win the game. Justin Herbert was fantastic and I’m still processing how exactly they lost that game.

Now I did pick Oregon to make the College Football Playoff and that pick was looking very good through the first half. Oregon would’ve controlled the Pac 12 North with the tie-breaker against Stanford. I actually really like Oregon to beat Washington in three weeks as I see no shot of Washington’s offense being able to keep up with Oregon’s in Eugene. The Pac 12 North race should be a fun one.

Notre Dame has found their guy

Not sure if you paid attention to this noon game, but the Notre Dame offense looks ten times better with Ian Book starting at quarterback. He completed 73 percent of his passes and threw for 325 yards against Wake Forest in a 56-27 win. Notre Dame could be a legitimate playoff contender if the offense keeps this up.

Tua May Not Play a 4th quarter until November

Tua is gone til November. Texas A&M was no competition for Alabama and their October looks like a breeze. They play Louisiana-Lafayette, Arkansas, Missouri and Tennessee before the November 3rd game against LSU. Missouri has the only shot of forcing Tua into the 4th quarter if QB Drew Lock can score enough points, but that’s doubtful. ESPN has taken notice and scheduled the next two Alabama games for noon. This may be the first case of a team being so good they get moved to noon because it’s over by the end of the first quarter.

AP Mess of the Week

What a week for the AP Poll. The voters have legitimately forgot about games that happened less than three weeks ago. The problem is the voters are ranking week by week instead of looking at the total resume. There are so many examples to choose from:

But my pick goes to undefeated #24 California being ranked behind #20 BYU even though California beat BYU on the road in Week Two 21-18. BYU doesn’t have a better record or the head-to-head advantage yet the AP voters think BYU should be ranked ahead? I get that BYU has an impressive win over Wisconsin, but it does not erase the fact that California went on the road and took down BYU. We need the Playoff Committee to straighten this out soon.