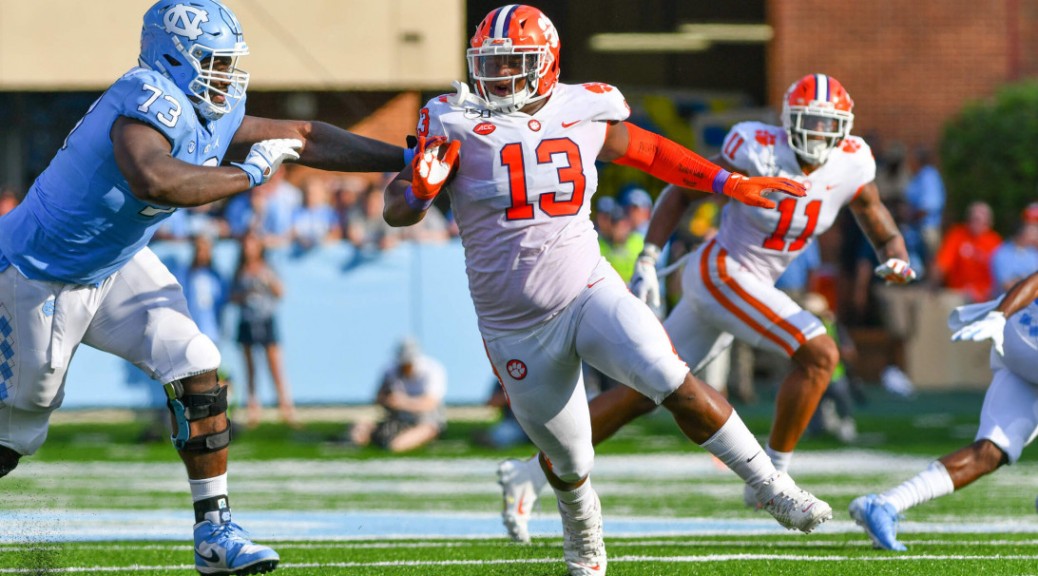 Clemson had an incredibly disappointing year last year and still finished 10-3. The problem last year was the offense as they finished 100th in yards per game. Whether they improve will be a major indicator on how far this team goes. If DJ Uiagalelei continues to decline look for true freshman Cade Klubnik to take over. On defense this is one of the greatest defensive lines in the country and, even after losing some key pieces in the secondary, Clemson should still finish as a top ten defense in the nation. Overall, I expect this team to be carried by the defense and the offense to improve from last season. Expect them to be on top of the ACC and be a college football playoff contender.

The Wolfpack have a really solid team going into 2022 and they are led by the best quarterback in the ACC, Devin Leary. If NC State opens up the passing game and lets him throw more, this is a team that could take down Clemson in the ACC Atlantic. Especially,  because this team is so good defensively with ten returning starters to a top 20 defense. The defense is led by one of the best linebacker duos in college football between Drake Thomas and Payton Wilson. Overall, if I knew NC State would open up the offense a little more I would trust them to take down Clemson… but even if they don’t I still see this team with a good chance of getting to double digit wins.

Coach Jeff Hafley continues to build this team in the right direction. Now with a very good defense and talented QB Phil Jurkovec and WR Zay Flowers returning, this Boston College team will be a tough out in the ACC. However, they are faced with replacing all five offensive lineman from last year. Overall, expect a solid squad who will surely make a bowl game.

Wake Forrest brings almost everyone back to a fringe top ten offense. This includes QB Sam Hartman and one of the best receivers in the country in AT Perry. The questions surrounding this team are on the defensive side after finishing last year 92nd in the country. Expect the defense to improve a little, but not enough to win the Atlantic like they did last year.

Louisville’s offense is extremely dangerous especially with four of the five starters back on offensive line and quarterback Malik Cunningham leading. However, I see defense being the issue especially along the defensive line. Overall, I see this being one of Coach Satterfield’s best teams he has had while at Louisville and should be a solid team in the ACC.

Florida State showed real improvement and growth last year. Now in Mike Norvell’s third year expect the best team yet. When healthy, Jordan Travis was a solid dual threat QB. The Seminoles also bring back 4 of the 5 starters on offensive line that should be decent. Defensively, expect Florida State to be solid with very good linebacker and defensive line play. They also have an edge rusher that transferred from Albany named Jared Verse who will make an immediate impact. Overall, I really like this team in the ACC. But a tough non-conference schedule featuring Florida and LSU will be tough to overcome.

Dino Babers is going into his seventh season as the head coach of Syracuse and they’ve gone straight downhill since winning ten games in 2018. This offense will be led by their running attack between running back Sean Tucker and mobile quarterback Garrett Shrader. Still, it is hard to trust them as I don’t project them having a good offensive or defensive line. Overall, don’t expect Syracuse to go bowling in what might be Dino Babers last season as the head football coach.

Miami found their quarterback of the future with the emergence of Tyler Van Dyke last year. Along with Van Dyke, Miami also has a solid offensive line and some talented tight ends. On defense this team was young last year, but return a ton of starters and added quality players via the transfer portal. The strength will be in the secondary after Miami played three talented freshman last year. West Virginia transfer Akheem Mesidor and Leonard Taylor make up a solid defensive tackle duo. Overall, in Mario Cristobal’s first season as head coach he has a solid team. If the defense matures quickly and the offense continues their momentum from last year… this is a legitimate ACC contender.

Coming off an ACC title, Pittsburgh returns 14 starters. However, they are losing first round quarterback Kenny Pickett and Biletnikoff award winner WR Jordan Addison. Still, with their entire offensive line coming back and a good replacement in USC transfer QB Kedon Slovis, Pittsburgh is in a good position to repeat as the ACC Coastal champion. This is especially true on defense where they return almost all of their defensive lineman and a solid secondary. Also returning is Habakkuk Baldonado who finished with 9 sacks last year. Overall this is a really good team, but I worry about coach Pat Narduzzi getting too conservative after his Offensive Coordinator Mark Whipple left for Nebraska.

The Tar Heels failed to live up to expectations last year, but they actually come into this season a little underrated. The strength of this team is the front seven and especially at the defensive line. Taking over at quarterback will most likely be Drake Maye who will have explosive wide receiver Josh Downs, coming off a 1300 yard season, to throw to. If North Carolina can have the offensive line and a complimentary wide receiver step up, this could be a dangerous team. Overall, expect the Tar Heels to compete in the top half of the ACC Coastal.

The Hokies moved on from the Justin Fuente era after a 6-7 season. Now, former Penn State defensive coordinator Brent Prye takes over for the Hokies. Also coming to Blacksburg is Marshall transfer quarterback Grant Wells who is a decent option. However, there are major questions with the offensive line and at wide receiver. Overall, this team will be led by their defensive experience. Expect an average ACC team who will most likely make a bowl game.

Quarterback Brennan Armstrong returns after last year’s Virginia offense finished as a top five offense. Also returning are their top three wide receivers including do it all player Keytaon Thompson. The issues for this offense are on the offensive line as they lost all of their starters from last year’s team. Add to the fact this defense was 108th last year, this is a team with major holes. Overall, Brennan Armstrong and the Virginia offense will do enough to make a bowl game.

Georgia Tech is a tough spot with a hard schedule and an inexperienced lineup. The Yellow Jackets return just one starter to the offensive line and zero starters in a secondary that finished 121st last year. Overall, it would be a miracle if this team makes a bowl game… don’t expect much.

New coach Mike Elko has a major rebuild on his hands. The defense finished 118th last year and only brings back four starters. Offensively, there isn’t a clear starter at quarterback. Overall, expect this to be one of the bottom teams in the power five.

The Marcus Freeman era starts at Notre Dame. Notre Dame is led by a strong offensive and defensive line. Tyler Buckner will take over as the starting QB along with a questionable wide receiver room. Overall, expect the Fighting Irish to be led by their defense. But the offense will need to step up if they want to be a legitimate playoff contender.