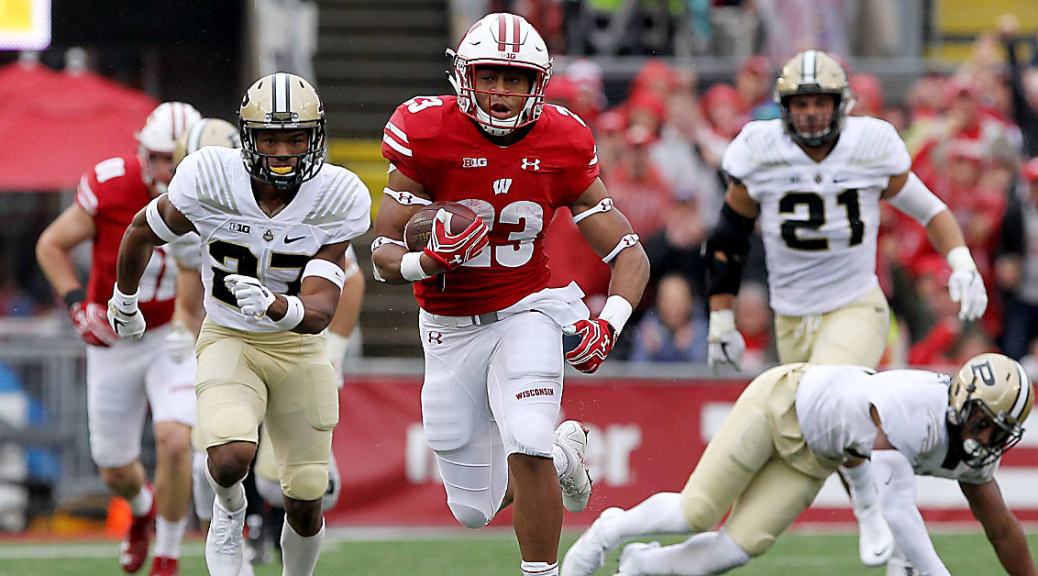 It is still up in the air on how many games, if any, Urban Meyer will miss this year. However, Ohio State is still extremely talented. QB Dwayne Haskins showed his potential in the Michigan game last year and he may even be a better thrower than J.T. Barrett was. Haskins is surrounded by weapons including extremely fast 1400 yard rusher JK Dobbins.

On defense, Nick Bosa is just as talented as his older brother and will have one more season terrorizing Big Ten offensive lines. The defensive line will be the strength, but the linebackers are young and inexperienced. The secondary will also have to find a way to replace first round cornerback Denzel Ward. Ohio State will be tested early with a matchup at Cowboys Stadium against TCU.

Jim Harbaugh was supposed to improve the offense. In his third year at Michigan, the offense finished 105th. QB Shea Patterson (Ole Miss transfer) will try to change that as he’ll have talented young receivers with sophomores Tarik Black and Donovan Peoples-Jones. Karen Higdon almost had 1,000 yards rushing last year on only 164 carries. Not only is Shea Patterson the key, but also improving the offensive line.

A defense that was 3rd in the nation returns 8 starters. The front seven includes studs like DT Rashan Gary, OLB Devin Bush, and DE Chase Winovich. Look for the defense to carry this team again. Michigan’s schedule is brutal with games against Notre Dame, Ohio State, Penn State, Michigan State, and Wisconsin. A conference championship is not out of reach from this Michigan team.

Michigan State was a surprise team last year going from 3 wins to 10 wins. The Spartans are also one of the most experienced teams as they return 19 starters. With QB Brian Lewerke throwing the ball and RB LJ Scott running the ball this offense is due for a major improvement from last season.

The defense was 7th in the nation last year and bring back 9 starters. DE Kenny Willekes returns with 7 sacks last season and MLB Joe Bachie leads the linebacking group. The secondary should also be dynamic this year with both corners and safeties returning. Given the Spartans solid defense and improving offense, Michigan State should have another nice year.

Penn State has some work to do to keep up with the other top teams in their division. The Nittany lions are no longer led by Saquon Barkley, but they do return QB Trace McSorley and an experienced offensive line.

The defense is another story with only 2 returning starters. The linebacking group is thin and Penn State graduated both starting corners and safeties off of last years team. The defense will have to step up in a hurry with an early September 29th matchup against Ohio State. Penn State will also have to play Wisconsin from the Big Ten West.

Maryland does have their own set of distractions heading into the season with reports of the football program having a toxic environment. Last year was rough for Maryland as well. After beating Texas they lost two quarterbacks for the season by week three. This year they should have more success than their 4-8 season. New Interim Head Coach Matt Canada will run a more pro-style offense with QB Kasim Hill under center.

The defense is questionable with only four returning starters and coming off a year where they finished 87th. The schedule starts off with a tough game against Texas in Landover, MD. Maryland has had two straight top 30 recruiting classes, so a change upward could possibly be coming if they are able to avoid the distractions.

Indiana is going through some changes as it tries to decide who its starting quarterback will be for the 2018 season. The competition is between Freshman Michael Penix Jr., Redshirt Sophomore Peyton Ramsey and Graduate Transfer Brandon Dawkins. Whoever the quarterback will be, he will have a very good running back in Morgan Ellison. Overall, this is a young team with not very many returning starters. A soft non-conference schedule against FIU, Virginia, and Ball State keeps a bowl game in reach.

Rutgers is at the bottom of the barrel in the Big Ten. Their offense finished almost last in 2017 and doesn’t have the necessary talent to keep them from the bottom of the East again. The defense will have to carry the Scarlet Knights led by OLB Trevor Morris who is looking for his 3rd straight 100 tackle season. It will be a matchup of the bottom power five teams when Rutgers takes on Kansas in the third week.

Wisconsin is a hot pick to make the College Football Playoff and for good reason. The Badgers have a loaded offensive line and they’re returning an almost 2,000 yard rusher with Jonathan Taylor. QB Alex Hornibrook will just have to manage the game for the Badgers to be in good shape.

The defense has 8 starters to replace, but TJ Edwards is one of the best LBs in the country. Also add DT Olive Sagapolu and this defense should be solid again. Wisconsin has an easy schedule with no tough non-conference opponents and just a few tough road matchups against Iowa, Michigan, Northwestern and Penn State. The schedule sets up well for a Big Ten Championship run.

Northwestern had a great season last year finishing 10-3 and could be set up again. Northwestern returns Senior QB Clayton Thorson and a veteran offensive line. On defense the Wildcats return six starters including defensive ends Samdup Miller and Joe Gaziano. The duo combined for 16.5 sacks last year. The secondary will have to improve after finishing 101st with 250 yard per game against. Northwestern have tough games against Notre Dame, and Big Ten East opponents Michigan and Michigan State. Look for another solid year from Northwestern.

Iowa will most likely be in for a similar year as last year when they finished 8-5 with a bowl game win. The Hawkeyes have a good returning Junior quarterback, Nate Stanley, who has one of the best tight end in the country with Noah Fant. The offense will improve on their 117th finish last year. The defense must replace all three starting linebackers including All-Americans ILB Josey Jewell and CB Josh Jackson. Iowa State will be a good early season matchup at home in their non-conference schedule.

A bowl game win in his first year, Jeff Brohm has Purdue going in the right direction. The offense returns eight starters, but it is still to be determined who will be the starting quarterback. Senior David Blough and Junior Elijah Sindelar both played pretty well last year. The defense also made a big improvement last year, but will face the challenge of only having four returning starters. Another challenge is two tough non-conference games against Missouri and Boston College. Back-to-back bowl game appearances should be attainable.

The Golden Gophers offense was terrible last season as it finished 123rd in the nation. P.J. Fleck in a surprise move named walk-on freshman QB Zack Annexstad. The new quarterback will have growing pains, but there is talented WR Tyler Johnson and 1000 yard RB Rodney Smith to rely on. The defense was solid last year and it returns seven starters. Along with the returning starters, Minnesota will also have Alabama transfer OJ Smith starting in the defense. Minnesota should have time to adjust to having a Freshman starting quarterback as they do not have a matchup against a power five opponent until week 4. A bowl game should be the goal for P.J. Fleck’s team.

New Nebraska head coach Scott Frost has his work cut out for him. Nebraska has no experienced quarterback on their roster and the starter will be either Redshirt Freshman Tristan Gebbia or True Freshman Adrian Martinez. The new quarterback will have Senior and 1000-yard WR Stanley Morgan Jr. The defense is another major question mark after giving up 36 points per game last season. The defense does have seven returning starters, but will need to improve from last season where they gave up 50+ points in their last three games. The non-conference isn’t challenging with home games against Akron, Colorado and Troy. Scott Frost’s turnaround of Nebraska will take some time.

Lovie Smith has not had a great time in college football. Lovie is entering his 3rd season, he is 5-19, and a turnaround is not in sight. The offense averaged 15 ppg last season, while the defense allowed 31.5 ppg. Graduate transfer A.J. Bush won the quarterback competition. Bush is a former four-star quarterback who has been on Nebraska and Virginia Tech’s roster. The offensive line had four freshman starters last year so expect an improved performance from them. The defense is also fairly young and will need to take a step up from last year. The Fighting Illini do return tackle-leader LB Del’Shawn Phillips. A key game to start the year will be a non-conference game against South Florida in Chicago.