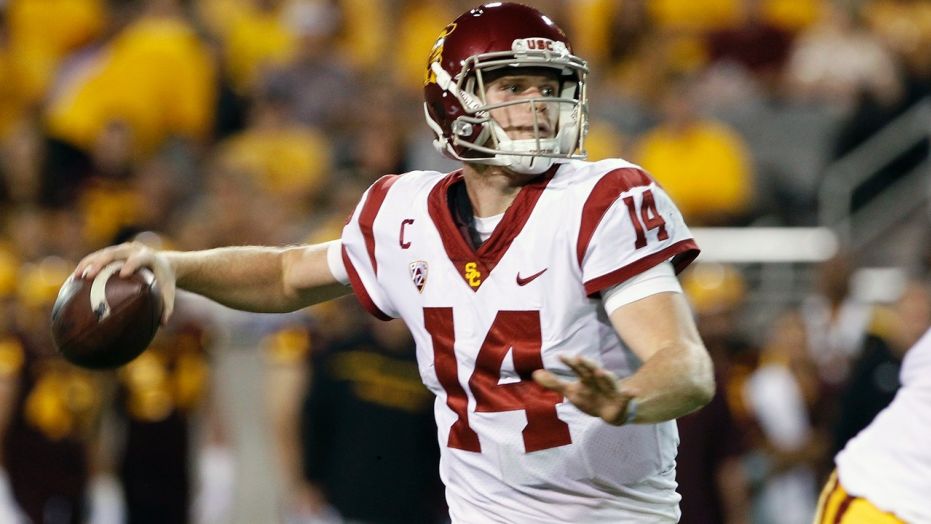 1. Saquon Barkley, RB, Penn State– Barkley does not have a clear weakness and is a special player. He is a tough runner, but has an added toughness to him. Along with this he has the athleticism to run away or jump over defenders. Barkley runs with great balance as well. In the passing game he is a natural catcher of the football. Barkley leads a loaded 2018 running back class. 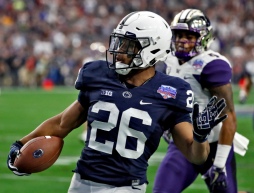 2. Bradley Chubb, DE, North Carolina State– His cousin Nick Chubb, running back for Georgia, received more headlines at the beginning of his college career, but it is Bradley that will be the higher draft pick. He is a relentless rusher that plays with a great motor. Throughout the entire season Chubb was a disruptive player with North Carolina State finishing with 10 Sacks and 23 TFLs. Chubb has the athleticism and the ability to bend around the corner you look for with a top defensive end prospect.

3. Minkah Fitzpatrick, S, Alabama– The leader of the Alabama secondary is one of the most versatile players in the draft. Early in his college career Fitzpatrick started at cornerback before eventually moving to safety. Fitzpatrick displays the combination of the coverage skills of a corner and the ball hawking ability of a safety. Fitzpatrick is a playmaker finishing his Alabama career with 9 INTs and 4 of those returned for a touchdown. His scheme versatility is a secondary coaches dream.

4. Sam Darnold, QB, USC– A lot was written, tweeted and posted about how Darnold was not ready for the NFL after a poor performance by the USC offense against the Ohio State Buckeyes. Darnold faced constant pressure with the Ohio State defensive line dominating the USC offensive line. It was not Darnold’s best performance, but he still displayed the skill set which I believe makes him the top quarterback in the draft. Darnold has a great pocket presence with a live arm. He is tough enough to stay in the pocket and make a throw, but at times tries to do too much and it leads to fumbles and interceptions. The combination of his great arm and accuracy makes him the top quarterback in this class.

5. Arden Key, DE, LSU– Heading into the year Arden Key was my top rated player. Key had a good, but not a great final season. He started the season slow with an offseason that included time away from the team. However, Key’s upside is through the roof. Key displays rare athleticism and bend for an edge rusher. If he can put it all together he could be the top player in this year’s draft. 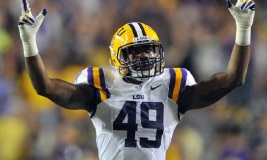 6. Clelin Ferrell, DE, Clemson– One of my favorite players in this year’s draft. Ferrell has flashed over the past two years as Clemson’s premier pass rusher. He is a very good pass rusher and has the size to hold up in the run game. Ferrell finished the year with 9.5 sacks. He also is known as a high character guy. After the Alabama loss he offered one of the reporters to be the person to represent Clemson if they had any questions.

7. Vita Vea, DT, Washington– Vea is a guy who has shot up my draft rankings from my first initial scouting report. He is a huge defensive tackle listed at 6’5 344 lbs, but he can move with the best of them. Vea throws offensive lineman around and takes up a massive amount of space. A few times he has literally held up offensive lineman with one arm. He is equally disruptive as a pass rusher and a run stopper. Washington moved him all around the defensive line, and I believe he has some scheme versatility at the next level.

8. Rashaan Evans, ILB, Alabama– Evans developed into the leader of the Alabama defense during his senior year. He is also one of the most athletic linebackers in this years draft and flies around the football field. Alabama moved Evans around this season and he displayed great edge rushing ability as well. The versatility along the different linebacker positions makes Evans an early first round pick.

9. Quenton Nelson, OG, Notre Dame– Nelson is an instant plug and play starter at the offensive guard position. As a run blocker, he is one of the best with a very powerful punch. He finishes his blocks and absolutely dominated some defensive lineman. Nelson has the athleticism to pull and get to the second level. A team picking early will get a good starter with Nelson.

10. Roquan Smith, ILB, Georgia– The leader of the Georgia defense, Smith had a great Junior season. He is a smart, rangy linebacker that can play all three downs. Against Oklahoma he was exposed a little in the first half for not being able to disengage from offensive lineman. However, his athleticism, instincts, and tackling makes him a first round pick. 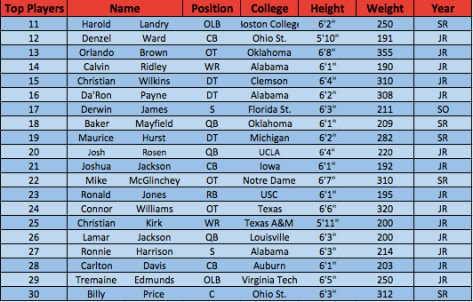