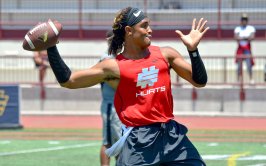 Alabama has always recruited the running back position well and this year is no different. There is the possibility for early playing time as well with Kenyan Drake graduating and Derrick Henry likely making the jump to the NFL. Alabama already has 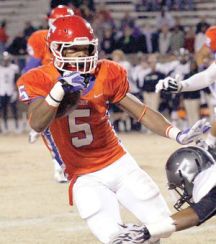 a commitment from B.J. Emmons (Morganton, NC) the fifth ranked running back and 63rd overall by ESPN. As for who they are targeting you have to look in Wayne, NJ at Kareem Walker, the top ranked running back in the nation. Kareem Walker decommitted from Ohio State in October and visited Alabama for the LSU game in November. Michigan is considered the favorite, but Alabama is not far behind. Next is athlete Devin White (Springhill, LA) who plays both linebacker and running back. The 99th ranked player by ESPN is a big back at 260 pounds. The battle for White will be another classic battle between LSU and Alabama. The 15th ranked running back by ESPN Robert Washington (Mount Holly, NC) is another Alabama target. Washington is considered a longshot to sign with the Tide.

Given Alabama’s young wide receiving depth and only Richard Mullaney moving on, wide receiver is not an immediate need. The Crimson Tide however do have a chance to land a solid receiving class. It is off to a strong start with the commitment of Trevon Diggs (Rockville, MD), the 123rd ranked player in the nation. The younger

brother of Stefon Diggs who plays for the Minnesota Vikings, gives the class a good wide receiver to build around. Also committed to the Tide is four star T.J. Simmons (Pinson, AL) who is the 62nd rated wide receiver by Rivals. Alabama is targeting many highly ranked receiving threats, including 8 in the ESPN 300. The two most likely wide receivers that could commit to the Tide are Ahmmon Richards (West Palm Beach, FL) and Cavin Ridley (Deerfield Beach, FL). The name Cavin Ridley sound familiar? Well it should as he is the younger brother of Calvin Ridley, the Crimson Tide’s true freshman phenom. Cavin is a solid player in his own right as he is Scout’s 17th ranked wide receiver. Ridley’s final list includes Alabama, Florida, Auburn and Tennessee. Ahmmon Richards who is Scouts 14th ranked wide receiver, is also a solid Alabama lean. Richards was a Miami commit, but decomitted from them in late October.

Keith Gavin (Crawfordville, FL) and Mykel Jones (Patterson, LA) are also highly rated players that are Alabama leans. Gavin has great size at 6’4 225 lbs with excellent athleticism. Gavin is the 80th rated player in the ESPN 300, as it will come down to Alabama, Florida State or Georgia. Mykel Jones will most likely come down to a classic LSU and Alabama recruiting battle. Jones is rated 269 in the ESPN 300.

With OJ Howard possibly heading for the draft, the tight end position becomes a major need as they would only return two scholarship players. However, Alabama already has two commitments from the 11th rated tight end Miller Forristall (Cartersville, GA) and 16th rated Brendan Scales (Wildwood, MO). The Crimson Tide

are not done however as they still have four highly rated targets all rated in the ESPN 300. Nick Eubanks (Plantation, FL) is the 259th rated player and will most likely come down to Florida and Alabama. There are two elite prospects that Alabama is targeting, starting with Isaac Nauta (Bradenton, FL) from the IMG Academy. The top rated tight end in the nation and the 10th rated prospect has visited Alabama, Georgia, Michigan, Ole Miss and Oklahoma State. Georgia is considered a favorite. Devin Asiasi (Concord, CA) is the 15th ranked player and leans towards hometown USC. However, he did visit the Tide for the Louisiana-Monroe game. It should be a challenge for Alabama to pull Asiasi from the West Coast. The last target for the Tide is the 191st rated player Jacob Mathis (Tampa, FL) who is likely to commit to either Michigan and Florida.

ear is no different. The future of the offensive line is bright next year, as Alabama will only lose two out of the five starters. For this incoming recruiting class, Alabama has four commits with two offensive tackles and two offensive guards. This includes Charles Baldwin (Windsor,CT), the top Junior College player in the nation. Baldwin should come in right away and be able to compete for the starting right tackle spot. Along with Baldwin, Alabama also has another great recruit with the 32nd rated player in Jonah Williams (Folsom, CA). With Williams and Baldwin the future of the offensive tackle position looks bright. Alabama also has the 3rd and 4th ranked offensive guard with Deonte Brown (Decatur, AL) and Chris Ownes (Arlingon, TX). Overall, Alabama has built a great class along the offensive line.

The recruiting class can only get better as Alabama still has blue chip targets out there headlined by Greg Little (Allen, TX). Little is the number two player in the nation and could be an instant impact player wherever he goes. The battle for Little looks like it’ll

come down to Ole Miss or Alabama. Jauan Williams (Washington, D.C) is another stud offensive lineman who could be going to Alabama. In late November, Williams cut his list to four including Alabama, Florida, LSU, and Florida State. Williams is the 65th rated player. The 90th ranked player Jean Delance (Mesquite, TX) could also pick Alabama. However, it will be tough to beat Texas for his commitment. He is also considering Michigan, LSU and Texas A&M. As for longer shots there is Javon Kinlaw (Goose Creek, SC), who is considered a South Carolina lean, and Tramonda Moore (Oklahoma City, OK) who named his final four of Alabama, Oklahoma, Oklahoma State, and TCU. Terrance Davis (Hyattsville, MD) is also a possibility as an Offensive Guard, but he will most likely end up at Michigan.